On a recent Sunday in the late evening, a San Carlos resident was driving home on his small motorcycle when he was hit by a car and thrown a considerable distance, resulting in serious injuries.

That man was Mauricio and he and his partner, Lauriann, want to tell their story to thank Rescate and everyone else who helped them on that night and thereafter.

When he was hit by the car, Mauricio suffered a head injury, a leg fracture and multiple serious cuts and abrasions to his face and body.  He was unconscious at the scene.  A witness called Rescate immediately and a good Samaritan (possibly the same person) used Mauricio’s phone to call Lauriann.  When she arrived on the scene minutes later, Rescate EMTs Javier and Daniel were working with Mauricio to stabilize him enough to transport.  They had arranged for a person to meet Lauriann and direct her to follow the ambulance.

The doctors at the Guaymas hospital were concerned that Mauricio might have a fractured skull and wanted him transferred to a hospital in Hermosillo for further tests that aren’t available in Guaymas.  Since Lauriann is an 18 karat Gold Card Member of Rescate and a San Carlos doctor approved the transfer, Mauricio was eligible to be transported via Rescate ambulance.  EMTs Javier and Daniel, who had left the Guaymas hospital after staying with Lauriann for some time, returned to transport him to Hermosillo.

Mauricio was discharged from the hospital the following day, but still required treatment for multiple contusions and “road rash”.  Lauriann drove him to Rescate, where an EMT came down the ramp to their car with a wheelchair and greeted them both by name.  They returned every day for a week to have Mauricio’s wounds cleaned and treated with an antibiotic ointment.  On every occasion, he was greeted and treated with kindness and skill.

Mauricio’s condition improves daily, but he was very badly injured and his recovery will be a long one.  Lauriann and Mauricio are very grateful to Rescate for everything from their quick response to the daily care and treatment.  They would like to thank everyone who helped them, including doctors and witnesses, with special kudos to EMTs Javier and Daniel. 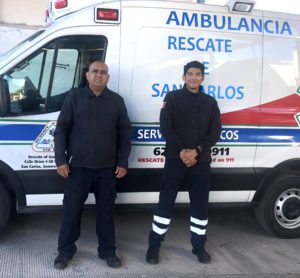 Where would San Carlos be without Rescate?