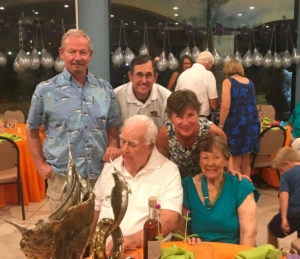 The Hammer Down Fishing Tournament was held the weekend of October 12th, 2019. This tournament is the amalgamation of the Labor Day Invitational Tournament, established in 1984 by Bill and Betty Lou Hammer, and the Cantina Cup. This tournament has contributed over $300,000 USD to charitable institutions in San Carlos and Guaymas over 35 years.

This year there were 18 boats in the tournament and Rescate de San Carlos is very grateful for the very generous share of the profits that was donated to our cause.  Other groups that received donations from this tournament are the San Carlos Foundation, San Carlos Rotary, Guaymas Lions, and several other San Carlos and Guaymas organizations.

The hardworking crew behind the scenes this year were:

In addition to our thanks to the above people, special mention goes to Wade and Judy Earl, Charla Hickey, Dave Rothschiller, Dave Dobson, Kathy Rodgers and Diane Barroll for their work above and beyond the call.

At the Awards Banquet Rescate’s own Diane Barroll (who has served on the Rescate board for 19 years and was the treasurer for many years) was awarded the Spirit of the Tournament award for her 19 years working behind the scenes of the fishing tournament.  She is an active member of the tournament committee and is always found at the registration desk, working at the weigh scales and scoring.  Congratulations Diane!

Spirit of the Tournament Award